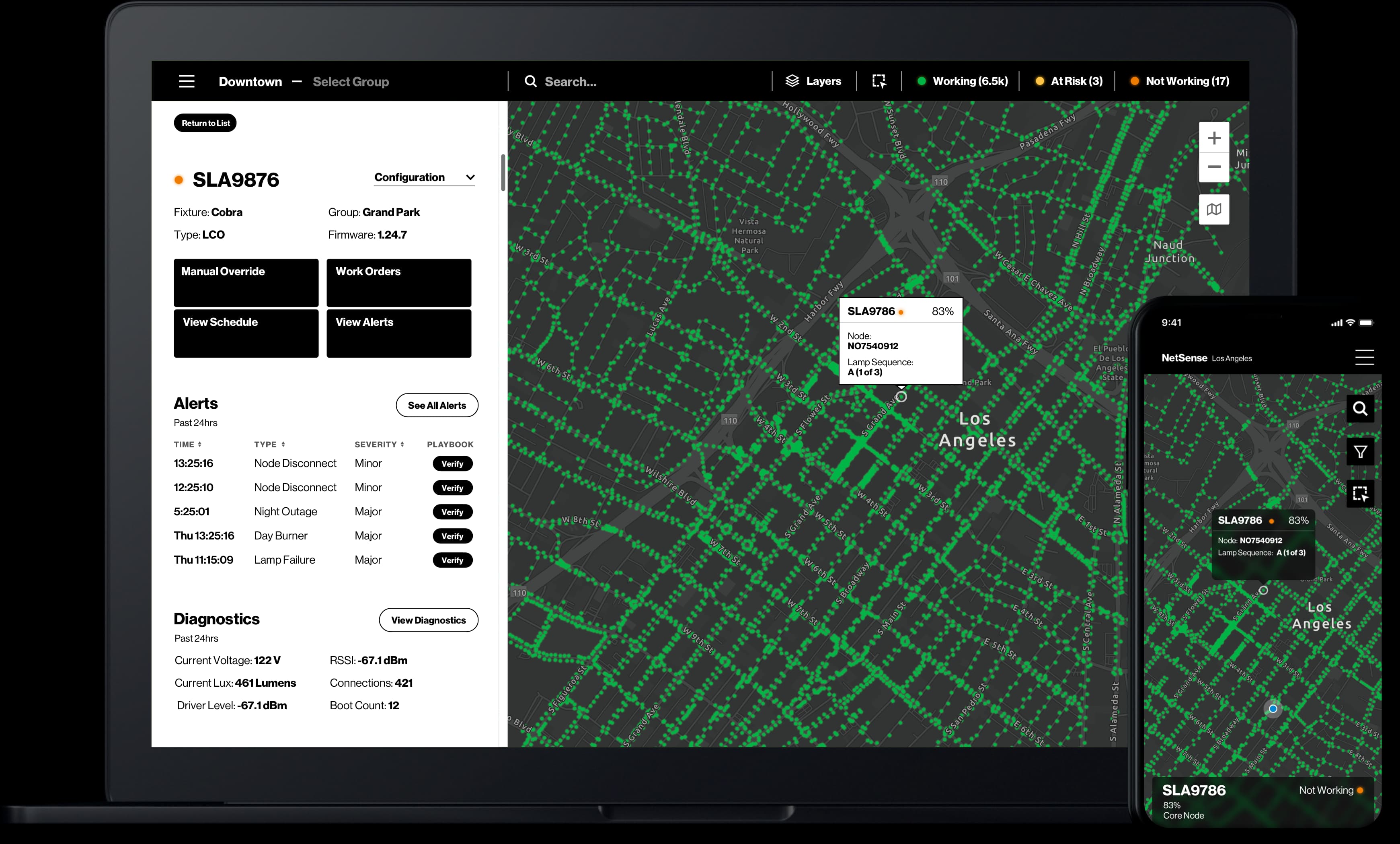 Verizon had a powerful piece of technology that could change the way cities manage streetlights. A system for remotely controlling LED modules when and where they’re needed, making streets safer and lights more efficient.

Verizon imagined an application where a person could confidently manage a half-million streetlights. Orchestrating maintenance, efficiency, and data analysis all from an online platform.

← Map of streetlights run by the City of Los Angeles, Verizon's target client

"...an application where one person could confidently manage a half-million streetlights. " 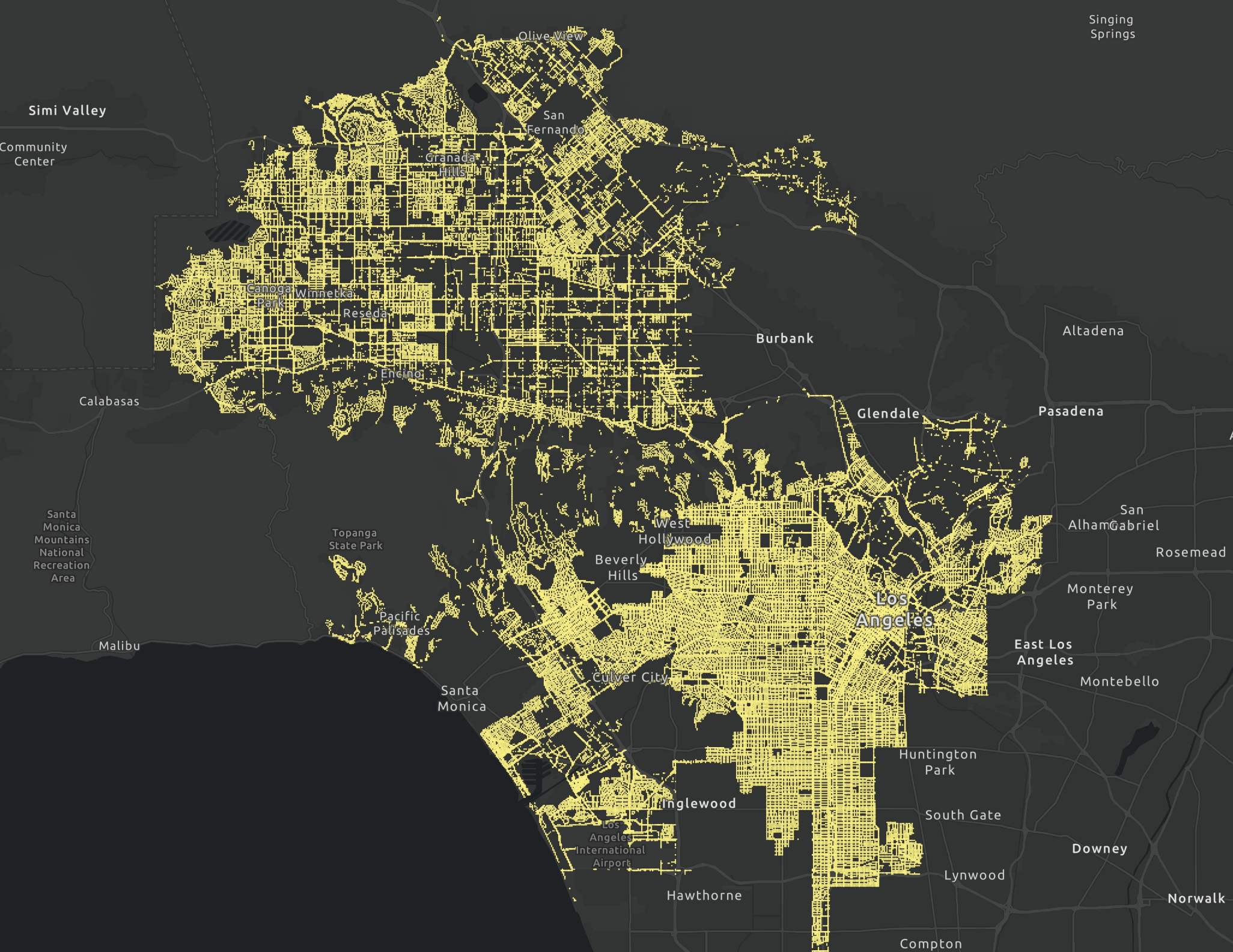 In this project, I lead the the design and delivery of the lighting system concept for Verizon. I was advised by a freelance UX strategist and supported by a product owner from Two Bulls. What originally started as a 4 month engagement was extended to 6 with an expanded scope and deliverable of the mobile maintenance system. 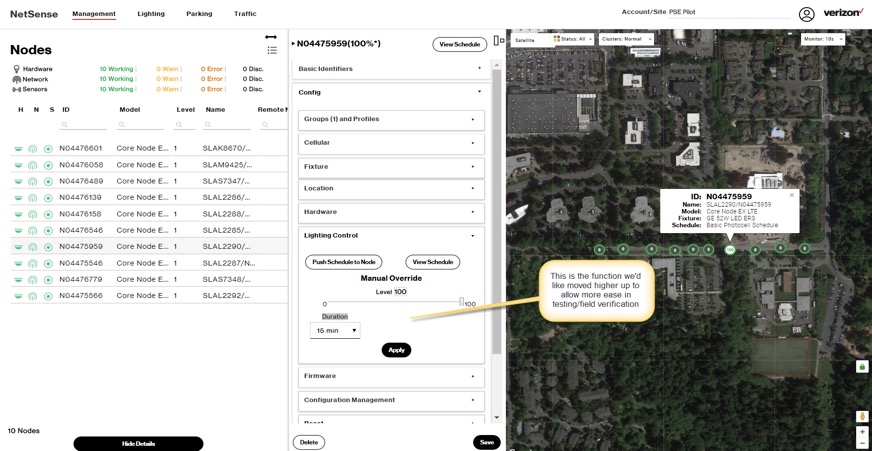 The current implementation was bloated, complicated, and overwhelming. Lighting managers, our primary users, were having trouble diagnosing issues in malls and parking lots, let alone entire cities. False positives were a huge problem and notification overload led to ignorance. Lighting managers were communicating maintenance needs to the repair crew via word of mouth.

As we talked to more users, we realized how broken the existing system was. Crucial functions were buried in a murky architecture and insights from data had to be deciphered.

"when a streetlight goes out in Los Angeles, what happens?"

The problems in the current interface and the vision for the platform couldn’t be realized on the existing system. We had to take it back to square one. Starting by asking...

Gavin, our UX strategist for the project, helped determine the bones of what would be Verizon’s new platform for Intelligent Lighting. We opted for a deep hierarchy, limiting the number of places to go to take action. We created user flows spanning the key areas of the platform; Lighting Control, Configuration, and Performance. 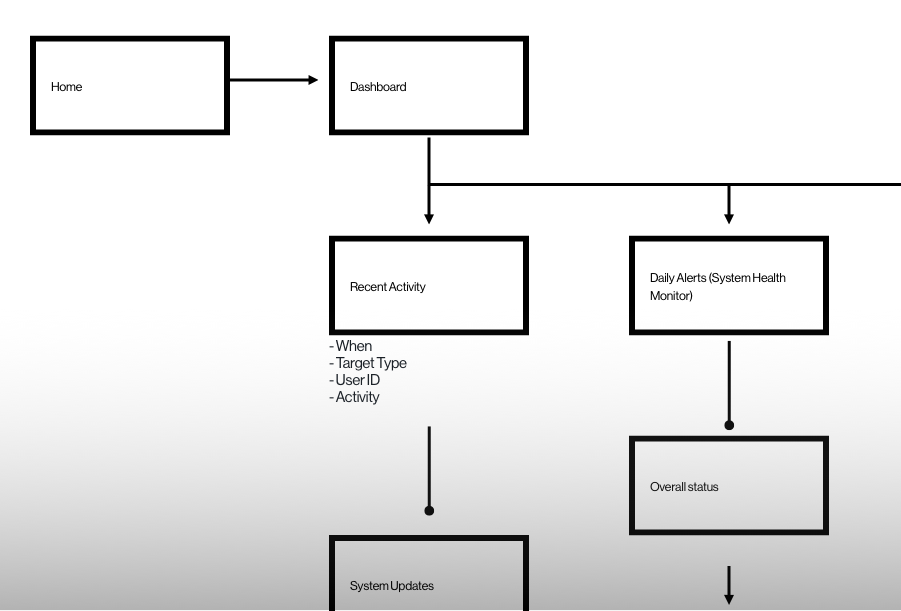 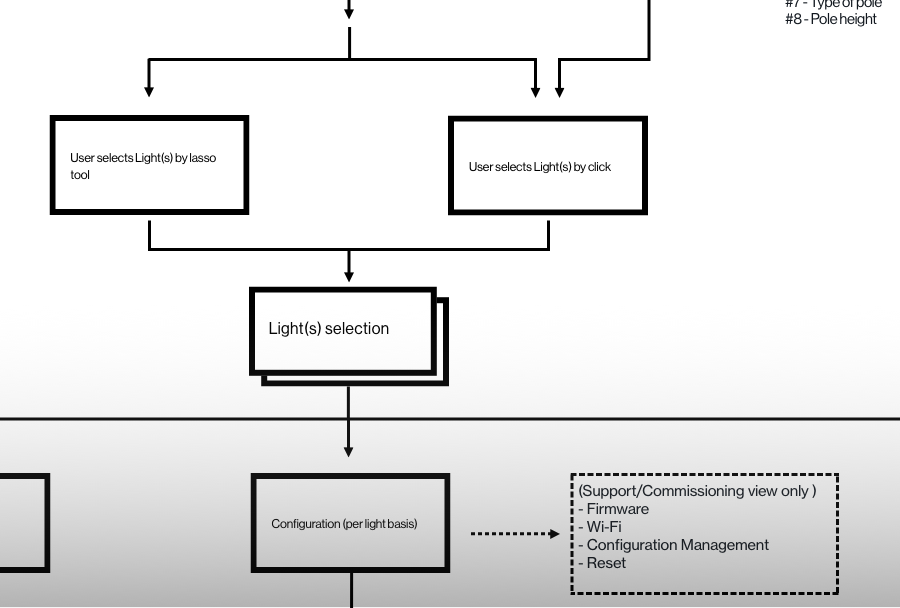 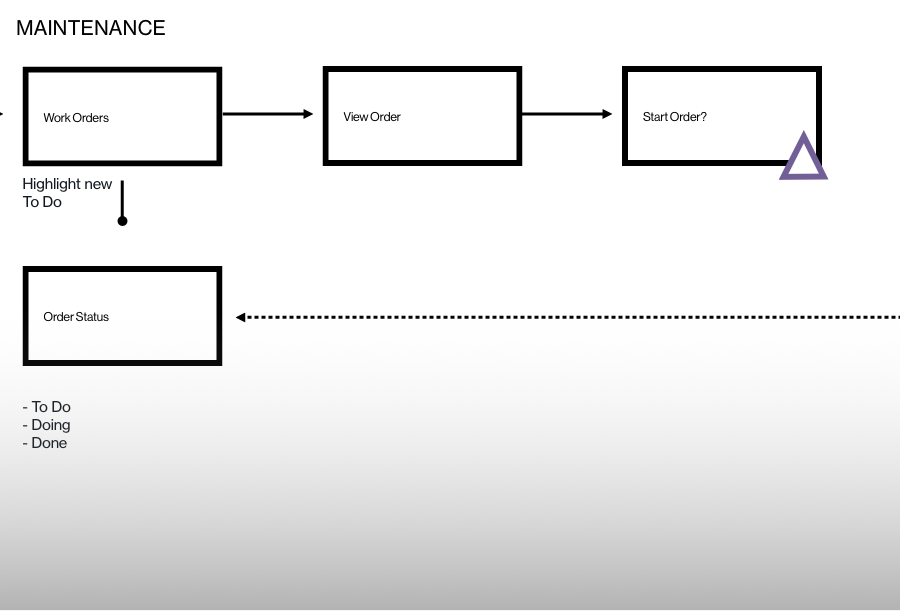 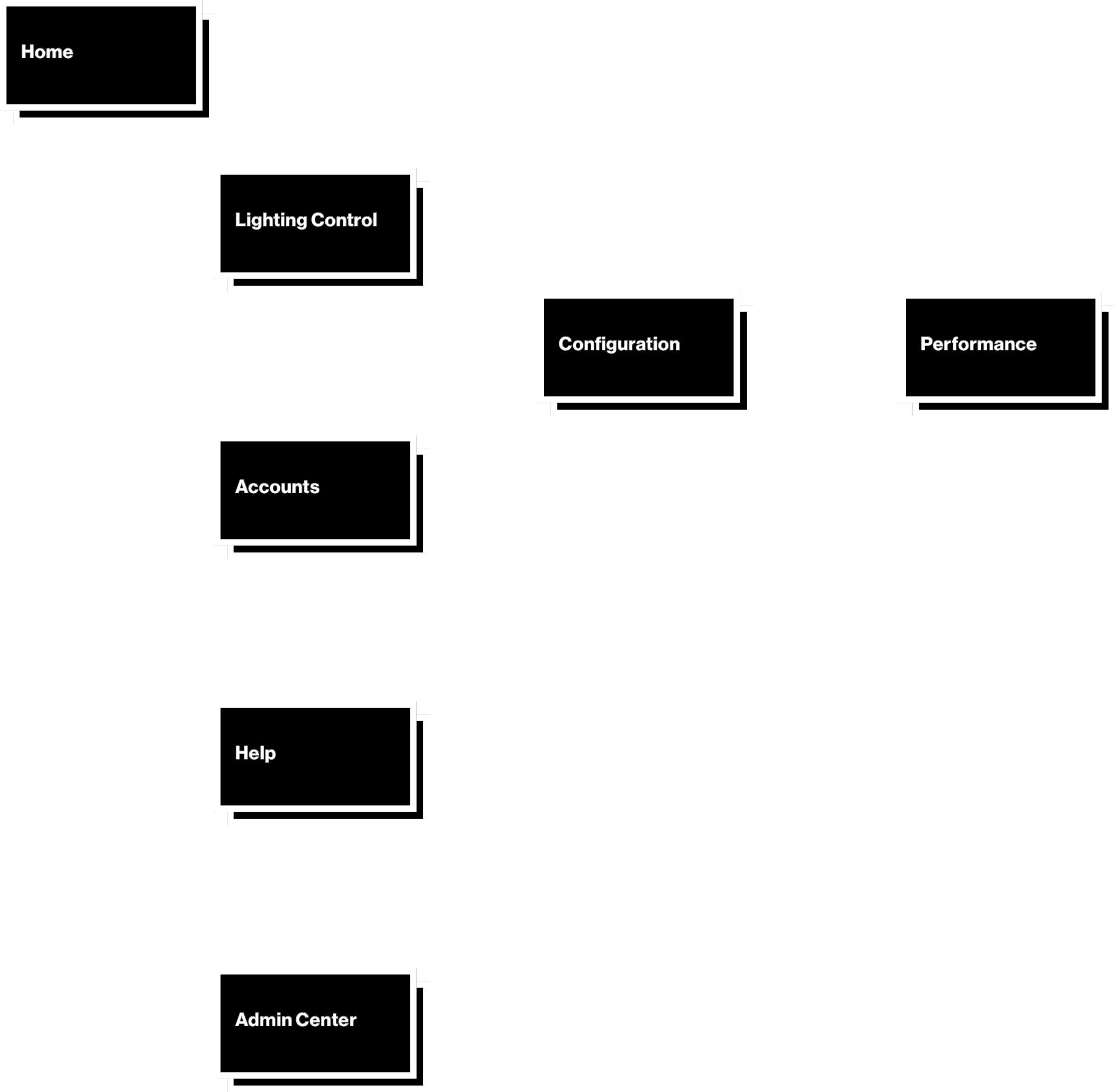 We started with the map. The current platform was congested and functionality for dealing with lights at scale was lacking. I redesigned the way lights were visualized and introduced a lasso tool to select them. We knew keeping track of thousands of lights might get confusing, so I designed user-created groups. Filtering by layers helping lighting managers focus in on problem areas quicker. 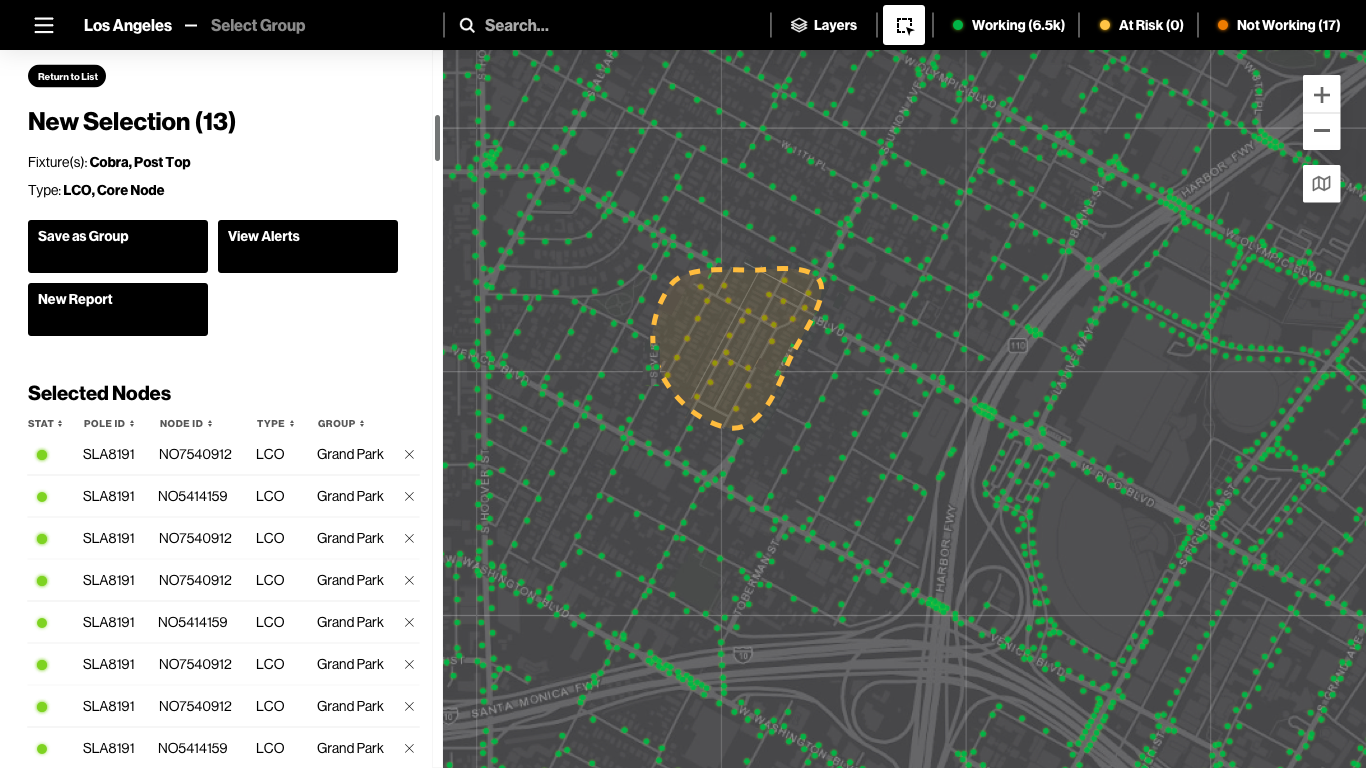 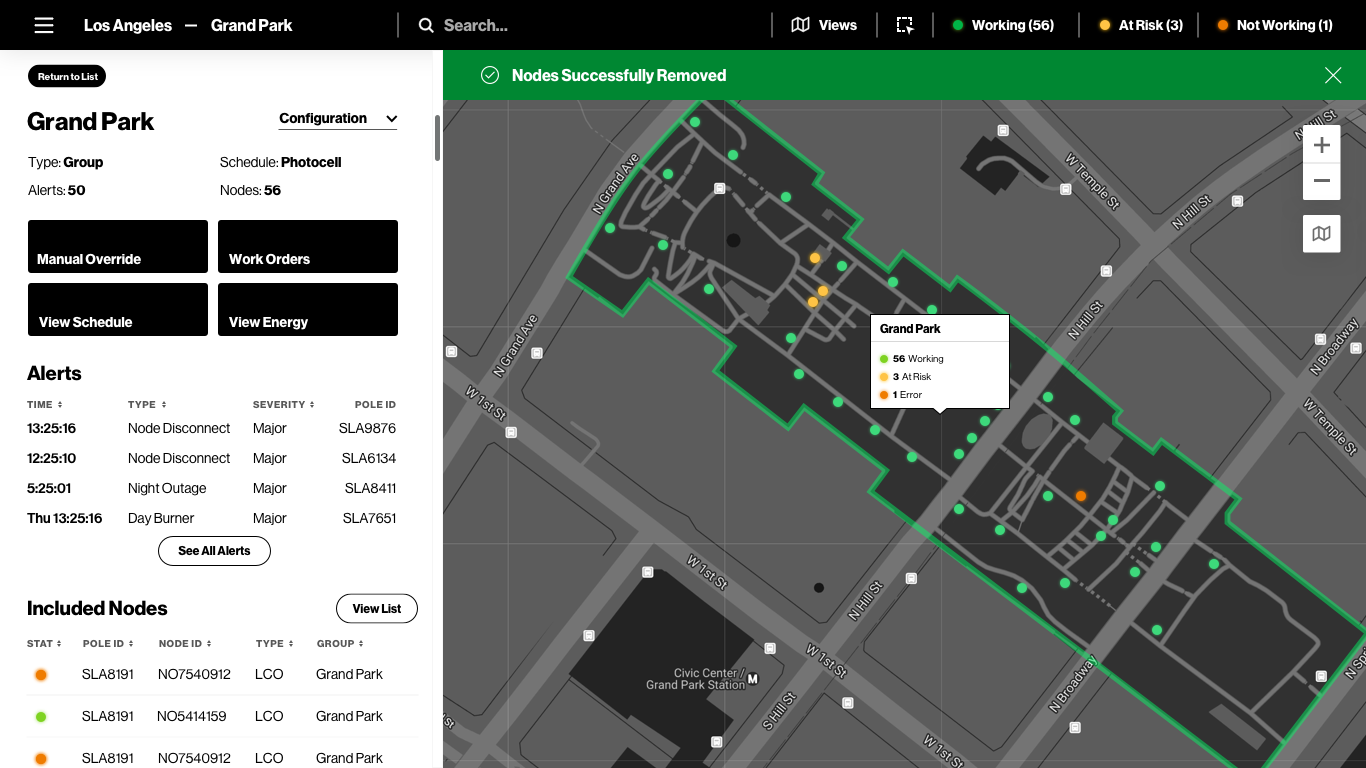 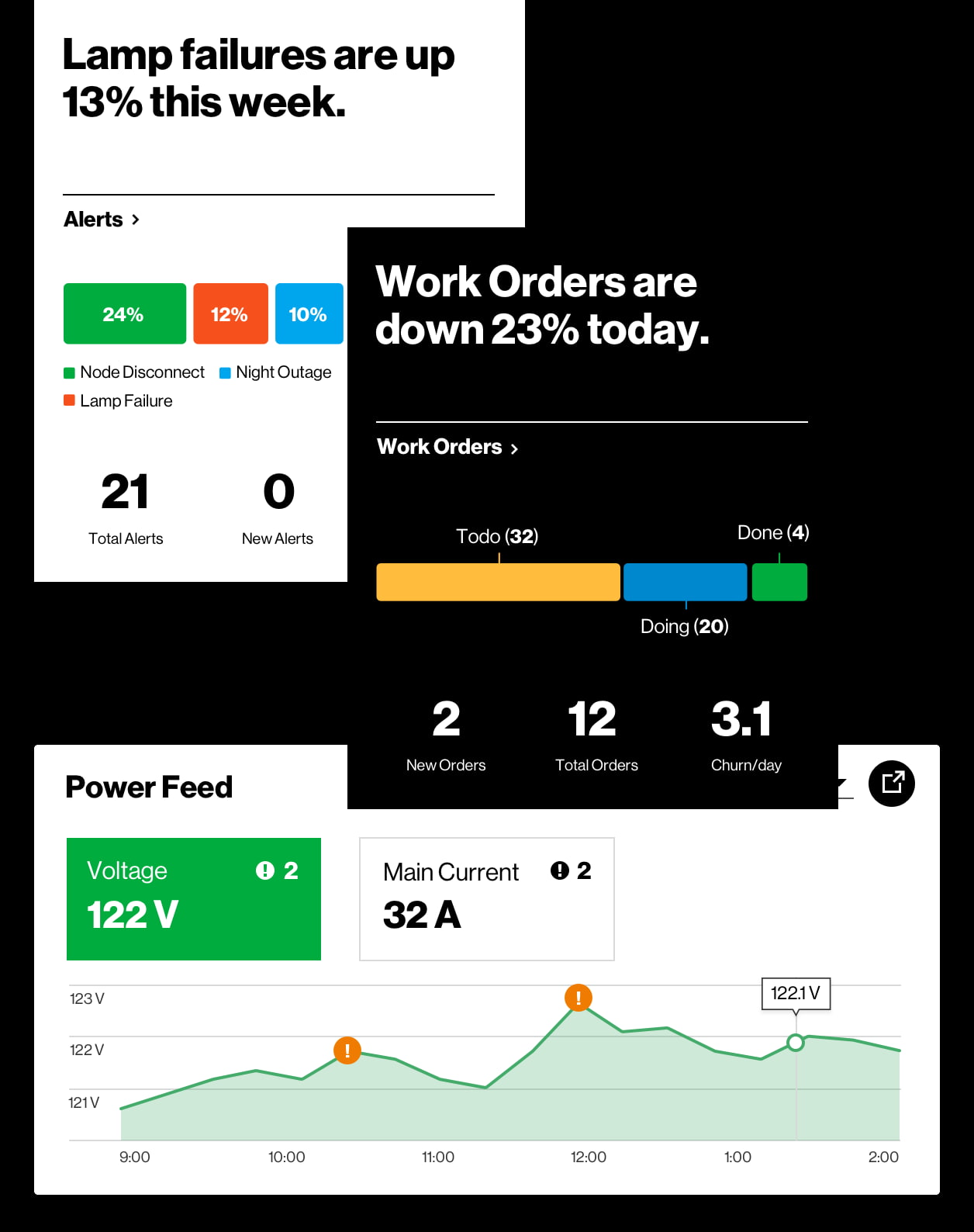 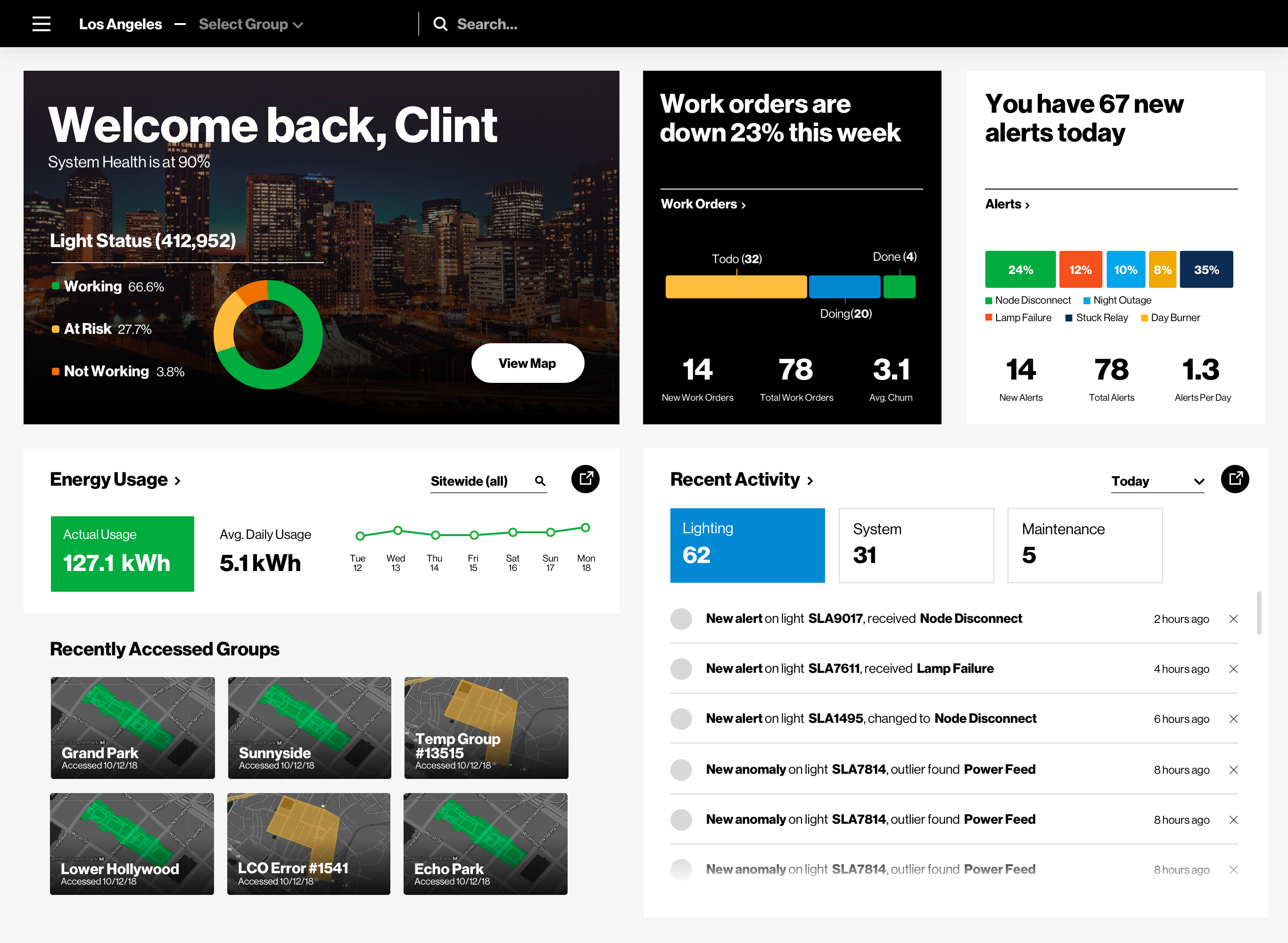 Verizon had all the data they needed, but struggled to communicate it effectively. Redesigning graphs and charts empowered our Lighting Managers with quick, powerful insights. Creating an energy savings simulator helped them make confident decisions quicker. Users could tweak saving methods and see the numbers in a side-by-side comparison. 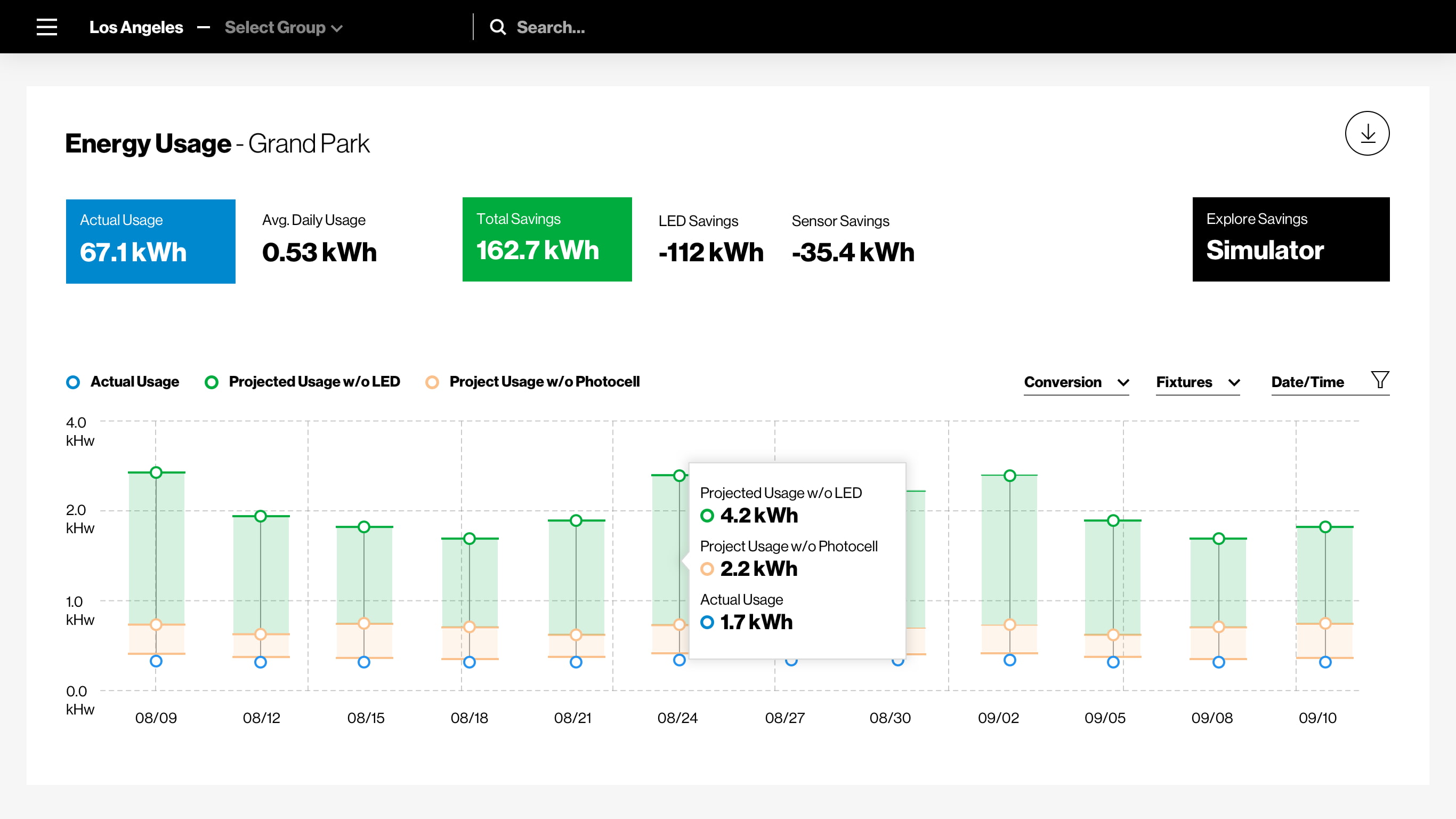 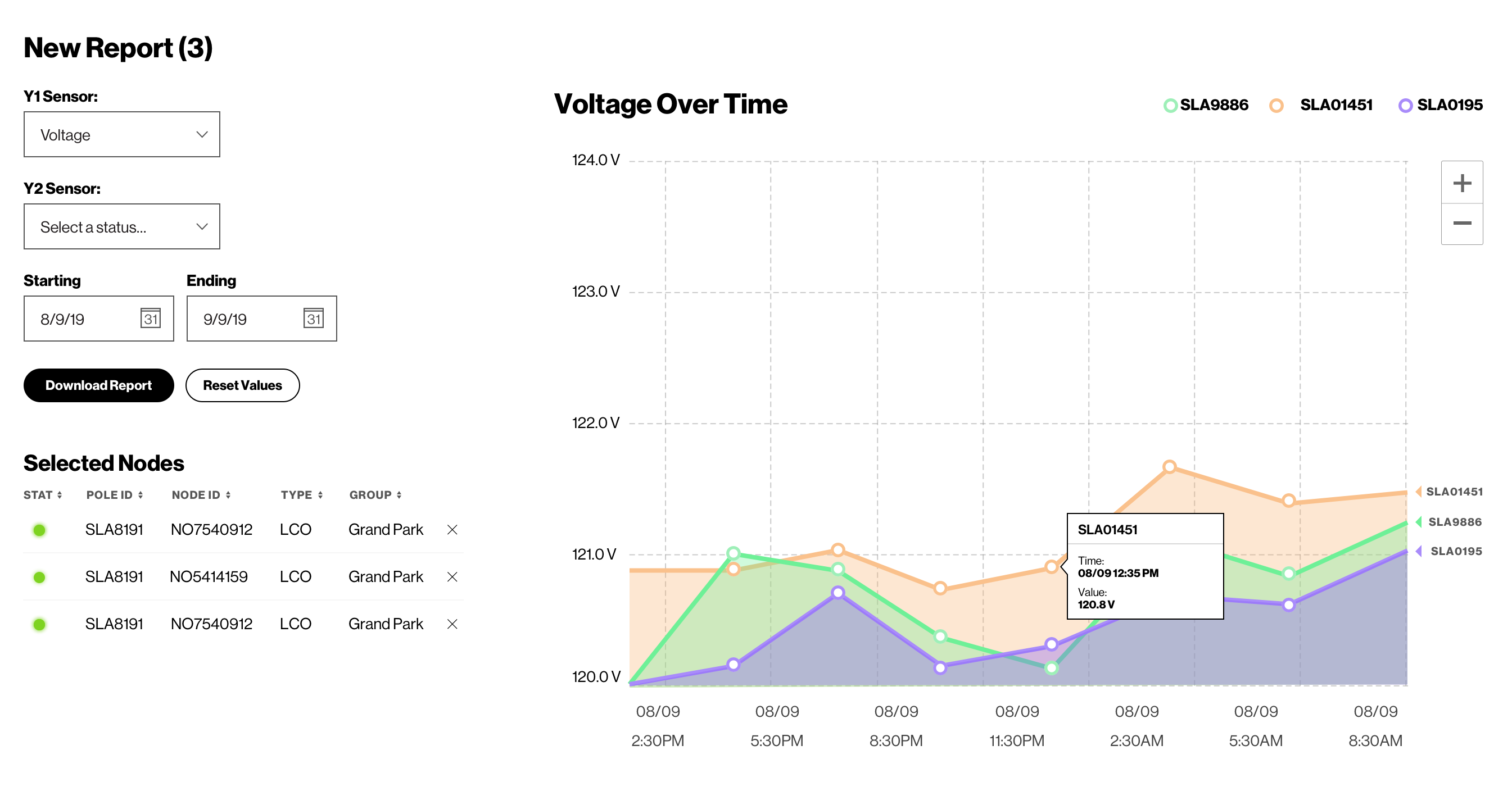 This is the other side of a lighting management system, the part where the light gets fixed. For the mobile experience, I created a clear, oversized UI system designed to be used in the field by maintenance crew-members. High contrast, bold text, and really big buttons.

← Checking in on a streetlight marked as "not working" 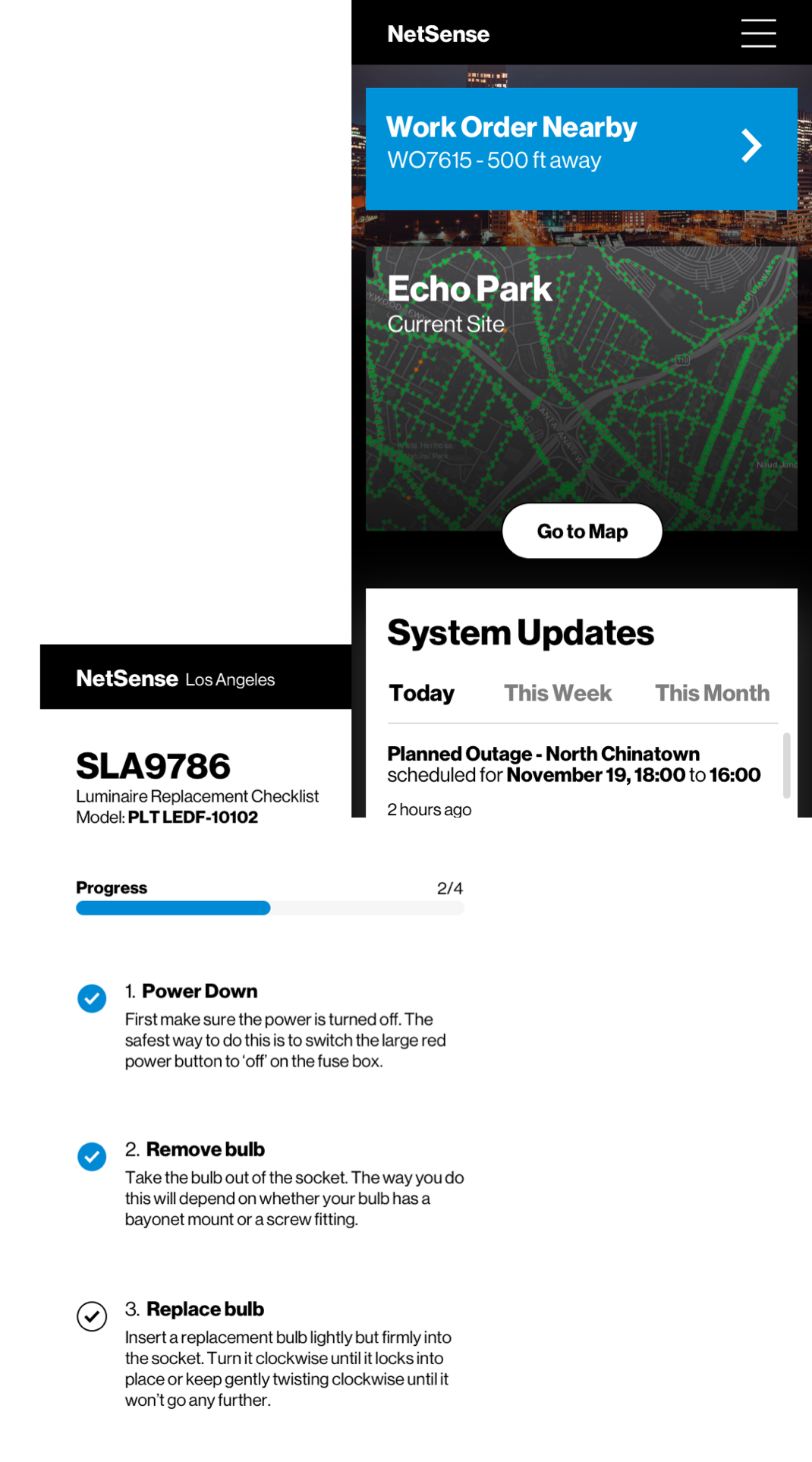 The result was 157 unique screens, 2 Zeplin component libraries, and one beefy design system. Because Verizon had chosen to build this platform internally, our handoff also included a front-end guide and user flows. 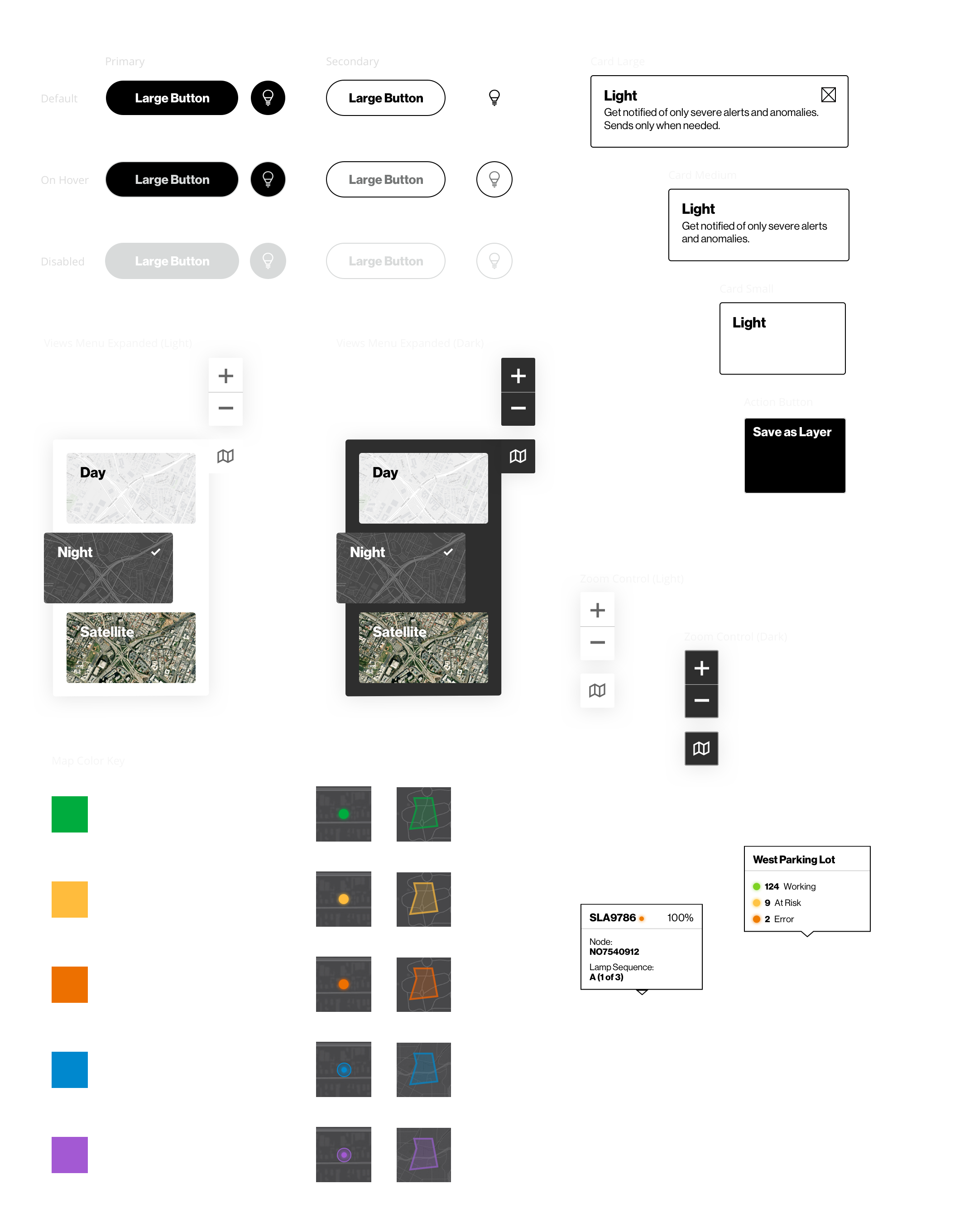 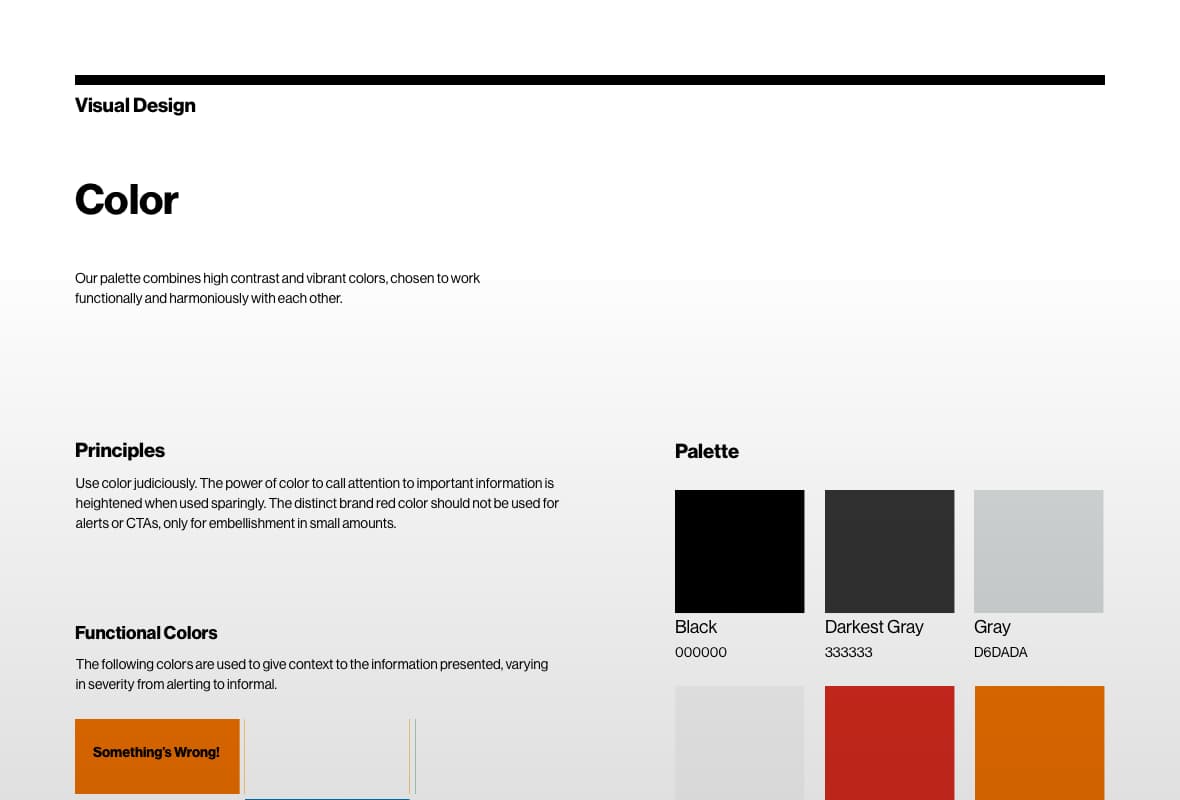 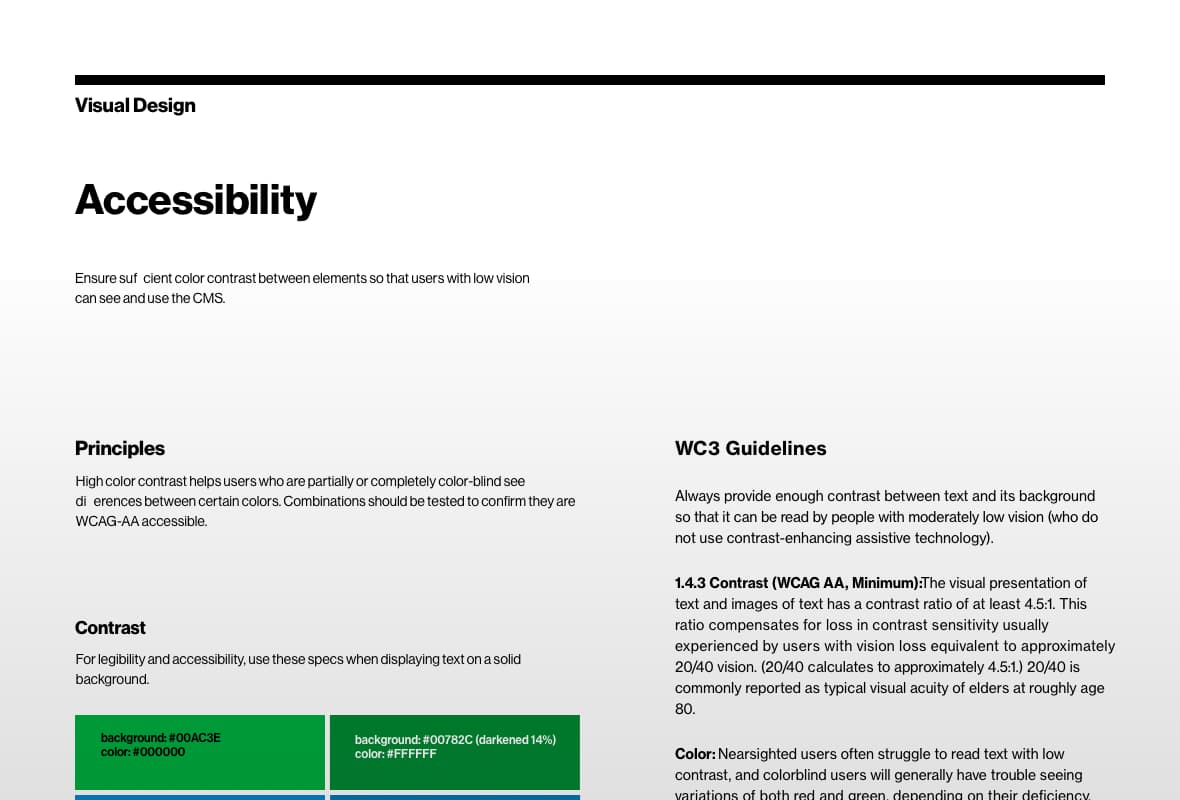 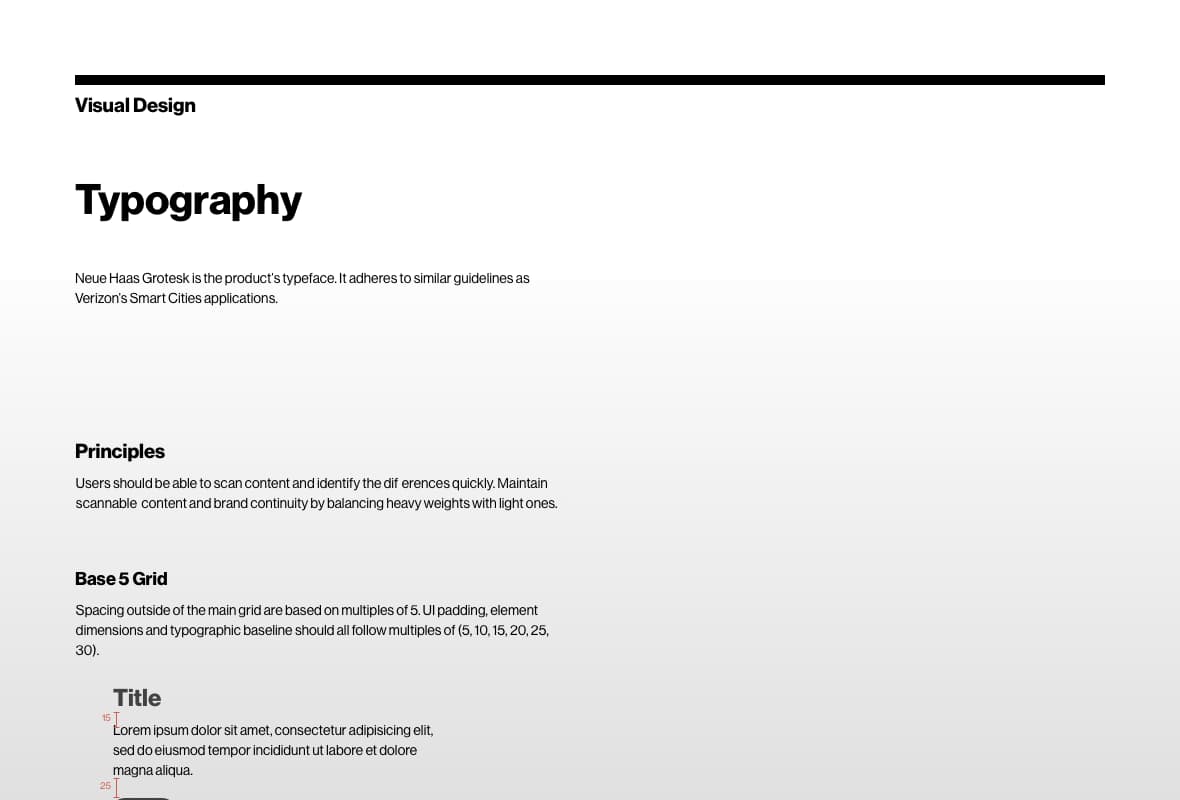 This is one of the larger projects I’ve been involved in. It's growing scope and complexity forced me to learn how to organize compelx systems and communicate them to others.

While the output of our work was UI and user flows, the level of system design required to understand and innovate the was immense. Some weeks, it seemed like we were discovering new complexities every day.

Communicating these complexities required a efficient way of working. It took a couple of sprints to find a cadence and method that worked best for our stakeholders. But once established, the methods of presentation melted away, and what became most crucial was the presenting the problem as we understood it, its location in the overarching system, and our solution for it.

"what became most crucial was the presenting the problem as we understood it, its location in the overarching system, and our solution for it."

This project allowed me to think about UI at scale, using principles to decrease complexity and up usability. Listening closely to the users available and not losing sight of the bigger picture.